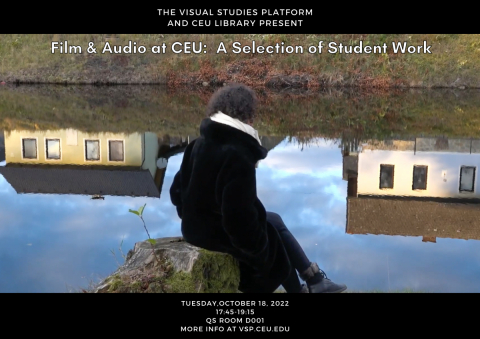 Every year a number of exceptional short films and audio projects are produced by CEU students at both the MA and BA level in production courses that are part of the Advanced Certificate in Visual Theory and Practice (VTP), and the BA VTP Major, and are facilitated by the resources and support of the CEU Library’s Media Hub. As a chance to introduce the Media Hub and VTP, and to celebrate the beginning of another academic year, we invite you to a selection of these projects that screened as part of the CEU DOCS showcase in May.

The program highlights how students from a range of departments and programs across the University are using film and audio to engage with the knowledge of their particular subject area, and communicate that knowledge via a visual/aural medium. It will be followed by a Q&A with some of the filmmakers.

This annual showcase is the first in a series of events hosted by the Visual Studies Platform throughout the year, which include screenings, workshops, and guest presentations that engage with the exhibition, analysis, and discussion of visual and aural media.

What was left to the silence

A short, narrative audio essay on voice anthropology and its scattered positioning between language and aesthetics.

In this video we have tried to encapsulate the feeling of vertigo; the sensation when you or the environment around you is in motion. Beyond the literal sense of Vertigo however, this video is exploring a deeper feeling of being suspended in time and place; of being uprooted in life, being in a new environment and the subsequent struggle of finding your footing in an unfamiliar place.

This short film is about the absurdity of a big street building project in times of climate crisis, the mistrust in politicians and about a story of success for environmental activists.

When My Family Left the Bad Church

When my Family Left the Bad Church brings attention to the unique challenges of leaving cultic or high-control groups through one family's story. The film traces the basic arc of my family's experience through interviews and archival footage. It examines the different types of trauma people go through in these environments and individual approaches to dealing with it. As narrator, my role is that of both insider and outsider. I don't remember life in the cult, but I've grown up immersed in its legacy.

„Da komm ich her?” Experiences within Agriculture in Vienna

The social conditions of food production are an aspect excluded from discussions about bio, regional and sustainable food in Austria. In particular, the glasshouse area of Southern Simmering is somewhat of a blind spot for many people living in the capital. On the audio-narrative level, we represent the different experiences of laboring and living around the glasshouses via a multivocal approach. On the visual level, we aim to convey the qualities of the space by paying close attention to the details, beauties, and hardships of the area.

Carmen Cirnfus (she/they) reflects on their upbringing as an Afro-Austrian in the village of Alt-Nagelberg, Austria, including on how being the only person of color in their village impacted their childhood and adulthood, and intertwines those experiences to reflect on the impact of the Black Lives Matter Movement in the Austrian context.

See you all there!