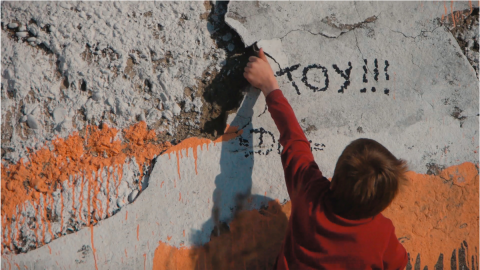 The 5th edition of Doc Lab, co-organized by Verzió and the CEU Visual Studies Platform, will mentor 9 projects in the frame of an intensive filmmaking workshop at CEU Mirabaud Lab from November 11th till 14th. Participants will receive guidance and mentorship in creating a trailer, a short film or documentary essay or in editing a scene or episode from a feature-length project in development. The Doc Lab films will be presented by the participants and the international team of tutors (Zsuzsanna Gellér-Varga, Moniek Wester Keegstra, Jeremy Braverman, Levente Pap) on November 15th at 16.30 at the Blinken OSA Archive.

Doc Lab films are subtitled and presented in English.

“Just for Fun” takes a critical look at the tradition of “chasing of women” during the Busojaras festival (Mohacs, Hungary). Intrigued by the history of the festival and its significance for the community, three filmmakers observed the festival with an ear tuned specifically to the gender dynamics of interactions with the masked busos.

This is the story about perseverance, patience and hope. Young ladies who have hope of becoming business entrepreneur’s found a good samarithan – Project Hope Africa - to make their dreams come true by donating 120 babies chickens, chicken cage and food. Happy is not only one of the business ladies but also helps with interpretations in the vingerkraal village.

Autonomous Factory Rog, squatted in 2006, is a very diverse and often chaotic autonomous space in the center of Ljubljana. It is also a thorn in the corrupt mayor’s side, who wants to turn it into a more lucrative venue. The city is gentrifying fast but the Rog community still resists.

Finding the job you can be successful in, getting independent from the parents and being accepted by the society - usual dreams from an extraordinary young woman. Mariann while trying to create an insect farm faces many difficulties that would challenge everyone, especially her who lives with autism.

NOT A MATURE POLITICIAN by Flóra Bognár (Hungary)

Blanka Nagy, an 18 year old student, gave a speech at a demonstration against the government. After that she became famous or notorius. The film shows her life after her character was assasinated by the media, her darkest points, and the path leading to become a candidate in the municipal elections.

Lilkó is a sensitive soul down-syndromed teenager. She’s been loving gymnastics since her pre-school years. In 2015 she was at Los Angeles’ Special Olimpic Games. As a gymnast she got two gold, two silver and one bronze medal. But in 2019, before the Special Olimpic Games she had to face the fact that no matter how good she is, she can’t go to the next challenge.

KIX is a story about a troubled street boy as he grows from age eight to eighteen, from kid stuff to the verge of adulthood. Over a decade he turns from a young mischief into a public enemy.

Anita, a born blind mother, is living with her husband and 2-years old daughter, when one day her husband discovers a special treatment that can help her see colours and shapes. Will she be better able to fulfil her role as a mother after the treatment?